This is the idyllic holiday bolt hole of a German family, who have always taken a keen interest in the origins of these idyllic Balearic farming estates.

Long before tourism became a way of life and made the Balearic coasts so popular, there were just seven large Fincas on the main island.

These beautiful, aristocratic estates created a wide range of products that can still be found in some parts of the island. Even today, Balearic almonds are the best and most aromatic in the world. Mayonnaise with it’s typical garlic taste, and available in virtually every restaurant along with traditionally unsalted bread, was invented on one of the islands.

It was this love for the islands, its history and its farming traditions, that provided the impetus for creating a garden paradise which of course included the planting of some olive trees, at the Finca bon temps.

Initially the oil those trees produced was intended merely for family consumption, however after a while, the process of producing the sort of high quality, uniquely Mediterranean olive oil the islands are famous for, became an all consuming passion.

The olive orchard at Finca bon temps is not large, and especially when the trees were young, they didn’t produce large quantities of oil. This meant there was plenty of time for experimentation, and testing, and finding once again the traditional methods of harvesting, racking and blending, selecting the right oil mill, then refining the process and discussing the results with local experts who have generations of experience with this typical and very traditional product.

Over time, the amount of olive oil the orchard at Finca bon temps produces has increased. Now it supplies not just the family, but their friends and a select group of customers in Germany, France and Spain. 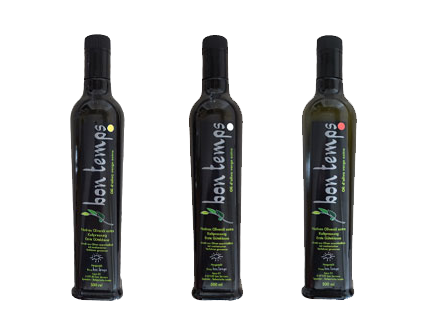 There are three distinctive sorts of olive; Arbequina, Hojiblanca and Picual, which are harvested by hand and brought directly to the olive mill to press the highest quality olive oil.

Arbequina olives are considered to be the best in the Mediterranean region and Finca bon temps produces a 100% Arbequina olive oil with a distinctively mild taste. Hojiblanca is the first time available as a 100% pure product, since we have establiched our own oil-milll in 2016, which gives us the possibility to control the whole process of the production. Before, we had to bring the olives to one of the public oil-mills on the island, which caused waiting times and therefore loss of quality. There is also a Cuvée which is a blend of all three olives. The Cuves gets its typical flavor from the addition of the strong tasting Pigual olives. Adding Hojiblanca to the blend tempers that strength into a uniquely special, yet distinctively elegant taste.

Do you have any questions?